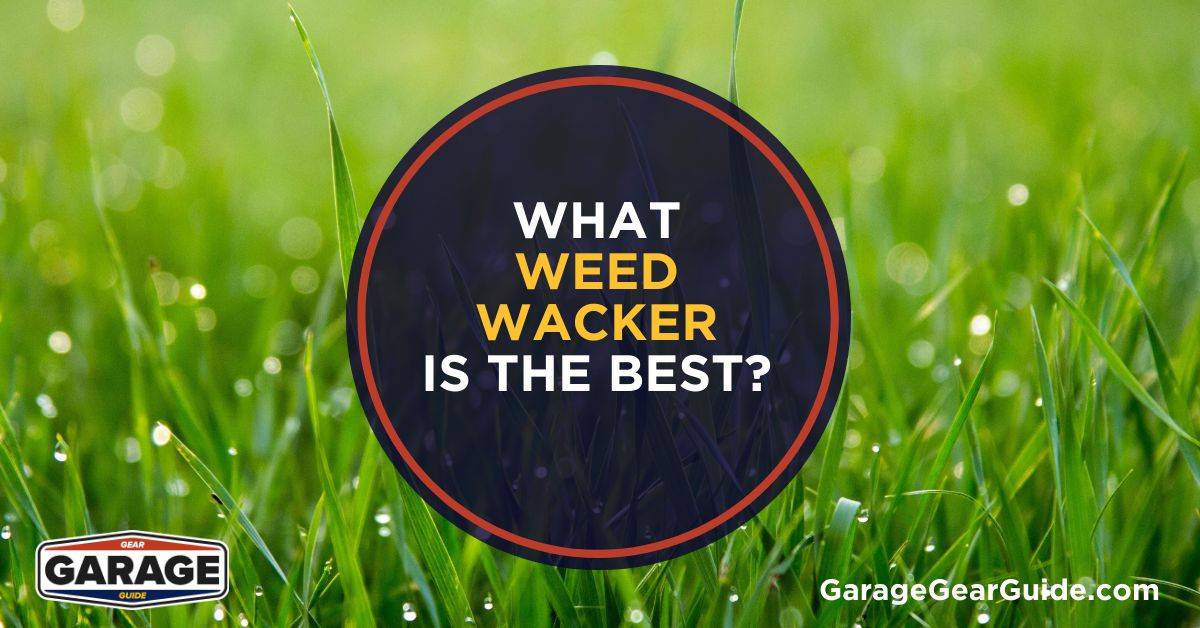 What Will I Learn?

If your front or backyard has tall grass, one way to get it trimmed is to use a good weed wacker. However, this leaves you wondering “what weed wacker is the best for my needs?”

In the following article, we’ll walk you through everything you need to know about weed trimmers as well as the best-rated options on the market. So without further ado, let’s dive in!

The most common weed wackers are those that use a string, in which the string cuts down on the weed at high speed. You can even find interesting videos where you watch it work in slow motion.

The problem is, these strings wear away with time while using, so you need to replace them all the time.

To solve that problem, manufacturers came up with some solutions that will help you cut the grass without using any string. They’re generally known as “no-string weed wackers”.

One of the most commonly produced weed wackers that work without string is the weed wacker with a saw blade.

These ones replace the string with a sharp blade that cuts the grass away at high speed. While these models eliminate the wear and frequent replacement of the string, they’re also significantly more dangerous to work with.

Ideally, weed wackers with saw blades are recommended only for experienced people who know how to deal with sharp machinery.

Due to its power, it cuts the much thicker grass lawns with ease. That’s why they’re usually preferred by households that have thicker weed.

As you already know, weed wackers are a motorized rotary tool that spins nylon strings at high speeds to cut the grass and maintain the gas at even lengths. They can be electric (corded) or gas-powered (cordless).

On the other hand, edgers, as the name suggests, are lawn tools that are responsible for cutting the edges of the lawn cleanly. In other words, they maintain the borders between the lawn and your driveway well-defined to create a sleek landscape.

While this comparison is mainly to explain how they both work, it’s easy to notice that both tools are usually used together for the best results. That’s why there are many weed wacker and edger combos available on the market.

Weed Wacker or Weed Eater? Are They The Same Thing?

While there’s an ongoing debate about the proper name of the string trimmer, both weed wacker and weed eater essentially describe the same tool.

Currently, the name depends mainly on the state you live in. According to Google Trends, most States call it “weed eater”, which is the name that its inventor came up with.

How to Replace Weed Wacker String

Since you’ll frequently need to replace the string on a weed wacker, manufacturers made sure that it’s a fairly simple process with no complications in its steps. Here’s how you can easily replace weed wacker string:

Now that you have a better idea about weed wackers, it’s time to find out about the best rated gas-powered weed wacker.

The best-rated gas-powered weed eater of 2020 is Husqvarna 128LD String Trimmer. This machine features a double-cycle engine with a full capacity of 28 ccs.

The cutting width of the string is about 17 inches, which is more than enough to cut most even out most lawns efficiently and in a short time.

The string line is easy to install and releases simply by tapping the weed wacker head into the ground. This eliminates the need for bending over and pulling out extra line as it wears off.

One of the main problems with gas-powered weed wackers is that they might run out of fuel if you can’t monitor the fuel level.

In the Husqvarna 128LD String Trimmer, the fuel tank is translucent, so it can also work as a fuel level indicator.

While most gas-powered tools are known to be troublesome while starting, this one comes with Smart Start technology. This enables you to start the trimmer easily with 40% less starter cord resistance.

When the machine is not in use, you can simply detach the shaft for easier storage and portability while transportation.

As you already know, using weed wackers and edgers together gives the best looking driveways and lawns.

That’s why many companies make a 2-in-1 combo to save you the space, time, and hassle of changing the tools.

The Black+Decker LST300 is an electric weed wacker with a powerful electric engine. The device comes with a 20-volt lithium-ion battery back for an extended run time while using the device.

It works as both a weed trimmer as well as an edger that you can interchange in seconds thanks to its easy converter feature.

The device has a cutting width of about 12 inches and is significantly lightweight. This way, you won’t need to wear a shoulder strap while using the weed wacker for a long time.

While the shaft isn’t detachable, it’s quite adjustable so you can use it according to your own comfort level to eliminate bending over.

With that said, you now know what weed wacker is the best for your own needs. As you can see, weed wackers are extremely handy tools that are great for all landscaping purposes and maintain an aesthetically appealing lawn!

Be sure to also check out my other popular posts: